For What It’s Worth is a story by Marc Bojanowski and Jake Hawkes, and follows a cocky 19-year old with enough smarts and talent to be anything. But the only thing he seems to care about is his job at the local antique store, which turns out is dealing in more than just furniture. When he eyes a precious collectible in the home of a wealthy 40-year old woman who is new to the area, he works to get his hands on it but things take a turn when she asks him to show her a good spot along the river. As the summer months pass by, decisions are made that can’t be taken back.

In searching for a script the past couple of years, we were coming up short to find a compelling story that could take advantage of the setting that the town of Geyserville offered, all while keeping the production budget as lean as possible.  In fall 2014, we reached out to Bojanowski, who Leslie grew up with in the Alexander Valley and who teaches at the Santa Rosa Junior College.

Bojanowski worked our production parameters into the story of For What It’s Worth, which makes the film attainable for production this summer. In early 2015, Bojanowski brought in friend and fellow writer Jake Hawkes to fine tune and complete the screenplay.  Bojanowski published a novel, The Dog Fighter, in 2004, and his second novel, Journeymen, has just been signed by Granta for release in the UK in spring 2016. This is his first foray into screenwriting.

Ultimately, For What It’s Worth is the story of two people at very different stages in life who face the same modern question: in a world where so  much of what we need is right at our fingertips, what is it we really want? 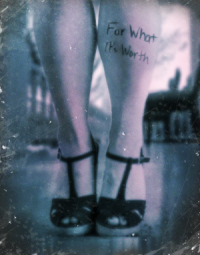